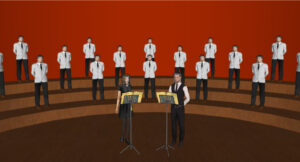 In addition to its direct impact on the life and health of infected people, covid19 has disrupted several aspects of society via measures that have been taken to halt the spreading of the disease.  Cultural activities, which, almost by definition, are bringing people together, are among the most affected, and in particular people singing together, due to the accompanying heavy breathing and possibility for far carrying droplet exhalation, is occupying a high position in the list of activities that are suspect to be considered as super-spreading events.

Based on experimental demonstrations, it is generally believed that horizontal droplet spreading during talking or breathing can be substantially reduced by wearing a mouth mask or face shield.  In the framework of enabling choir and other group singing together without unacceptable risks for droplet spreading related infection risks, putting on a face shield and somewhat extending the distance with neighboring singers might be a mitigating measure with limited discomfort involved.

By performing laboratory recording tests, we have addressed the question on the extent to which choir singers wearing a face shield would affect the quality of the choir sound.  Six non-professional volunteers singers were asked to sing in a karaoke setting with text provided by a laptop screen and background music supplied by open headphones, an English version of the Christmas song ‘Silent night’.  Each singer was singing the song twice: once with and once without a plexiglass face shield.  They performed in the anechoic chamber of the Laboratory of Acoustics of KU Leuven in Heverlee, Belgium. The experiments were guided by researchers from the Department of Physics and Astronomy and the Faculty of Architecture. 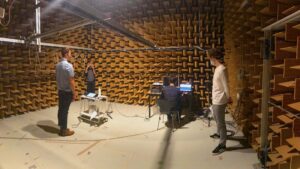 After removing silences, the spectra of the recordings were compared between the two scenarios.  Recordings were also made in the Acoustics lab at Slovak Technical University (STU) in Bratislava, Slovakia. A summary of the spectral modifications caused by the acoustic shielding of the face shield for the different singers is shown in the figure below.  Also a summary of spectral modifications of different tissue mouth masks is shown. 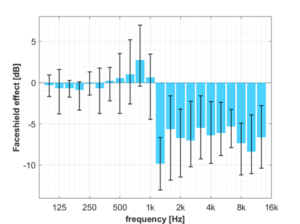 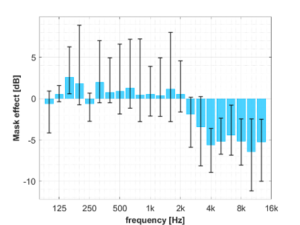 Although there are variations among different singers, it is clear that below 1kHz, the effect of the face shield is quite limited, while for 1kHz and above, the acoustic shielding effect of the Plexiglas screen reduces those sound components with 3-12dB.  The effect of this “low-pass filtering” effect on the acoustic quality of choir music can be assessed by comparing the original and synthetically filtered version of choir music performed by Leuvens Universitair Koor (Facebook – Youtube) (LUK) in the audio links below.  The effect is quite audible. This is not surprising: the well audible part of the spectrum of choir sound extends from about 100Hz to about 5000Hz.  Frequencies above 1kHz are responsible for the brightness of the sound.  A reduction of the sound pressure level with 3dB and 12dB is analogous to reducing the number of singers with respectively a factor 2 and a factor 16.  The observed low-pass filtering effect is somewhat analogous to the effect of hearing the choir at some distance.  Whether this is “acceptable”, is a matter of subjective perception.  The effect can be assessed by comparing original recordings of LUK with their synthetically filtered version based on our laboratory recordings.

LUK version of “Songs Of Farewell – There is an old belief”:

In the framework of the EU-RISE Project PAPABUILD an international consortium of universities, research institutes and companies are investigating the subjective perception of sounds passed through building elements and looking for innovative sustainable ways to improve their sound insulation.  Psychoacoustic perception analysis is done by listening tests in which people subjectively compare the loudness of sounds passed through different building elements.  As in the case of face shields and mouth masks, the perceived effect on the loudness and sound colour of sound transmitted though an insulating building element is a matter of subjective perception of the sound spectrum.